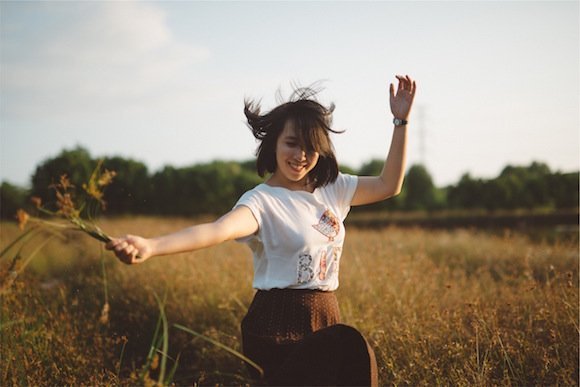 You might not have a money tree, but you can have a happiness tree. Dopamine, Serotonin, Oxytocin, and Endorphins are the quartet responsible for your happiness. Many situations can trigger these neurotransmitters, but instead of being in the passenger seat, there are ways you can intentionally cause them to flow.

Being in a positive state has significant impact on your motivation, productivity, and wellbeing. Here are some simple ways to hack into your positive neurochemicals:

Break big goals down into little pieces. Rather than only allowing your brain to celebrate when you’ve hit the big finish line, you can create a series of little finish-lines for frequent dopamine release. And it’s crucial to actually celebrate—buy a bottle of wine, or head to your favorite restaurant whenever you meet a small goal.

And avoid the dopamine hangover — when you slump after a massive high. Create new goals before achieving your current one. That ensures a consistent pattern for experiencing dopamine. As an employer and leader, recognize the accomplishments of your team. Sending your team an encouraging email or giving a small bonus is a “dopamine-hit” that will increase future motivation and productivity.

Serotonin flows when you feel significant or important. Loneliness and depression are present when serotonin is absent. It’s why people fall into gangs and criminal activity—the culture and ‘community’ facilitate serotonin release. Unhealthy attention-seeking behaviors are also a cry for what serotonin provides. Princeton neuroscientist Barry Jacobs explains that most antidepressants focus on the production of serotonin.

Reflecting on your past achievements allows your brain to re-live the experience. Your brain has trouble telling the difference between what is real and what is imagined, so it produces serotonin in both cases. Gratitude practices are popular for this reason, they are reminders and mental pictures of all the good things you’ve experienced. If you need a serotonin boost during a stressful day, take a few moments to reflect on your past achievements and victories.

Another way to boost your serotonin levels is to have lunch or coffee outside and expose yourself to the sun for twenty minutes; your skin absorbs UV rays which promotes Vitamin-D and serotonin production. Although too much ultraviolet light isn’t good, some daily exposure is healthy for boosting your serotonin levels.

Often referred to as “the cuddle hormone,” a simple way to keep oxytocin flowing is to give someone a hug. Dr. Paul Zak explains that inter-personal touch not only raises oxytocin, but reduces cardiovascular stress and improves the immune system. Rather than just a hand-shake, go in for the hug. Dr. Zak recommends eight hugs each day.

Giving someone a gift, will also cause their oxytocin levels rise. You can strengthen work and personal relationships through a simple birthday or anniversary gift.

Endorphins are released in response to pain and stress, and helps to alleviate anxiety. The surging “second wind” and euphoric “runners high” when running are a result of endorphins. Similar to morphine, it acts as an analgesic and sedative, diminishing your perception of pain.

Along with exercise, laughter is one of the easiest ways to induce endorphin release. Even the anticipation and expectation of laugher e.g. attending a comedy show, increases levels of endorphins. Taking your sense of humor to work, forwarding that funny email, and finding several things to laugh at during the day is a great way to keep your endorphins flowing.

Aromatherapies: the smell of vanilla and lavender has been linked with the production of endorphins. Studies have shown that dark chocolate and spicy foods will cause your brain to release endorphins. Keep some scented oils and dark chocolate at your desk for a quick endorphin boost.

For another great article on your happy chemicals, check out Meet Your Happy Chemicals by Loretta G Breuning Ph.D.

Leave a Reply to Mark Smith

G’day! I’m Thai, an Aussie studying law in the U.S. I'm a former chef, athlete, teacher. My goal is to give you researched articles to live a happy and productive life. If you've enjoyed the site, please share the articles and subscribe to the newsletter.

Meet Shannon Kaiser — Inspiring The World, to Play With The World

Shannon Kaiser is a best-selling author of “Find Your Happy,” a travel writer, and life coach. In this series of 4 videos, Shannon shares: 1) […]

Meet An Nguyen — Creating A Business Around Your Lifestyle

Mr. An Nguyen came to the US in 1993 from Vietnam. He graduated with an engineering degree but found that the available career options did […]

Mr. Akshay Nanavati is a Marine Corps Veteran on a mission to run across every single country in the world. Born in India and growing […]

Tran’s Martial Arts has five locations in Colorado. What has become a successful movement started in a small garage by the Tran family. Moving over […]

Brandon Epstein is a young entrepreneur based out of Austin, Texas. With a ton of passion, Brandon is set on transforming people’s lives, building Apps […]

John Lee Dumas is the founder of EntrepreneurOnFire.com A 7-day-a-week podcast pulling in 6-figures per month. John shares his journey as a country boy from Maine, […]

Big thanks to Mr. Anthony Noud for taking time out to share his incredibly inspirational story. While growing up in Australia, Anthony struggled with what […]

Clementine Mills is a talented young actor who has already enjoyed great success. She describes her childhood as a happily nomadic upbringing in England and […]

Tina Bollendorff is an inspirational singer/songwriter originally from the Sunshine Coast in Australia. Her journey begins at the age of 8 with piano lessons. Constantly […]

The word mongkongtong is Thai for “long golden dragon.” Soren received this name early on in his career from the Thai’s as it reflected his […]

Big thanks to Jeff Lam for taking time out to share his journey. Jeff is the the National Australian Powerlifting Champion- winning the title three consecutive […]

Thanks again for tuning into another inspirational interview with someone who has stepped out to pursue their dream. DJ Maxwell is one of the most […]

Tyrone Tongia opens up and shares his inspirational journey. Facing that inner passion and demon head-on, through the low points of sleeping in a park […]

Shayne Lock is the founder of Sage Magazine and Soul Traveller Radio. Shayne opens up and shares his own personal journey of discovering and connecting […]

Luka Lesson shares his story about the cathartic redirection of his life, from uncovering a passion and building a lifestyle around that passion. He has […]

At the age of 18, Kimanzi had his entrepreneurial spirit set alight starting his own bread delivery company which soared and allowed him to employ […]

Through a near death experience at the age of 6 and a difficult family upbringing, Joel realized that there was a buried voice within him- […]